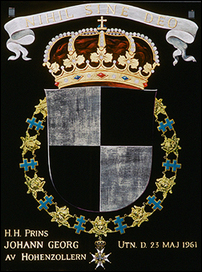 March 2nd 2016 was a day of sadness and joy for the Swedish Royal family. Early in the day, the King’s
brother-in-law, Prince Johann Georg (Hansi) von Hohenzollern passed away at the age of 83. In 1961, he married Princess Birgitta of Sweden, and although having lived separate lives for decades, he in
Munich and she on the island of Mallorca, they were never divorced.

Upon marrying Princess Birgitta, Hansi was given the Order of the Seraphim, a very exclusive order, normally given to royalty, archbishops and foreign heads-ofstate. The shields of each knight of this illustrious order are kept in the Royal Palace in Stockholm. On the funeral day, the shield is escorted by the Life Guard to the Riddarholmskyrkan where, after a ceremony, which includes band music, it is placed on permanent display. There are over 1000 such shields along the walls of this former church, and to wander around there is an inspiring lesson in European history and culture.

The joyous event was of course the birth of little Prince Oscar Carl Olof of Sweden, Duke of Skåne,
second child of Crown Princess Victoria and Prince Daniel. Most Swedes rejoice in this news, and in the choice of names, in particular Oscar, which is a name that was unknown in this country up to 1810, when Jean Baptiste Bernadotte, later King Carl XIV Johan, introduced his son an heir by that name. Right now it is number 4 on the popularity list for boys’ names in Sweden, and that was before the little prince was born ... 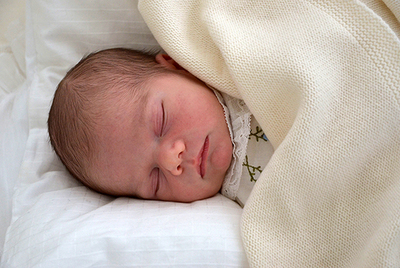 Not everyone rejoices though. Several columnists and angry journalists now holler about how the Royal family has grown by leaps and bonds and that it is high time to call a halt to this uncontrolled fertility. “How many ribbon cutters do we need?” one newspaper exclaimed. My counter question is: How many unprofessional, offensive and opportunistic journalists can we stomach?