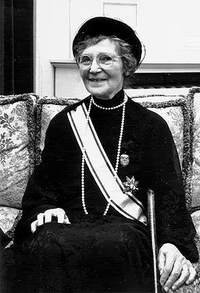 Recently, word was received of the passing of Queen Fabiola of Belgium. Fabiola de Mora y Aragón, a Spanish noblewoman, was born in 1928 and married King Baudouin of the Belgians in 1960. She was universally respected and continued to be a much loved “Extra Queen” long after the death of her husband in 1993. She was thus a widow – a dowager – for 23 years, which is a long time, but nowhere near a record …
Queen Victoria lost her Albert in 1861 and made something of a career of her grief, dressing in black and wearing a widow’s cap, for the rest of her life. She mourned her husband for 40 years, and yet she can’t be described as a “dowager” since she was in fact the sovereign herself, reigning for all those years. Thanks to Downton Abbey and Maggie Smith, the world outside the UK is nowadays also fully aware of the concept “dowager”, a word that in the rest of the world was otherwise mostly used for the mother of the last Tsar of Russia, Dagmar or Maria Feodorovna. She was the “dowager empress”, a position she had from 1894 to 1928 – 34 years. Still, not a record:

The Scandinavian term “Änkedrottning” [Queen Widow] was normally used in those countries, but the tradition ended with Queen Ingrid of Denmark, who chose to remain “Queen” after the death of her husband, King Frederik IX. And as for dowager kings or consorts, there have not been too many. One is however portrayed in the family album in this issue; King Consort Ferdinand of Portugal.